The villain responsible for the recent spate of fire alarms that has disrupted classes, angered the fire department, and pillaged the countryside has been apprehended, according to sources in the school administration. The culprit was taken into custody late Thursday night after a daring raid conducted by a campus aide SWAT team. No one was injured in the operation, and the team quickly disarmed the suspect and removed its batteries.

Interim principal Brenda Keegan announced, “We have nabbed the evildoer who has plagued our school with false panic, causing students to flee the building as if the flames were already upon them. The criminal had established connections within Newton South's electrical network, and I believe it would have created even more terror if our elite crew of men and women had not been so brave.”

Cheers broke out following Keegan's speech as students celebrated the end of the detector's reign of terror. Many danced happily in the halls, while another group was seen snapping off faucets and defecating in urinals to express their joy. “Finally, my children and I will be safe!” said senior Rachel Cainman. “Wait, you're not publishing this, are you?”

Others expressed shock that such an unassuming individual could have committed such a heinous crime. “He was a nice smoke detector, always blinking his friendly little red light as I passed,” said sophomore Carlos Lorant. “He was one of the few who would actually acknowledge passersby. He must have been framed.”

The fire safety device was arraigned yesterday in front of a packed courtroom. Relatives of many of the victims wept as the defendant was brought in, its face covered with a small paper bag. The room was completely silent as the charges were read and the device entered its “not guilty” plea.

After the hearing, the smoke detector was swarmed by ravenous reporters looking for a story. As it was led away, the device shouted, “Whooooooop?” 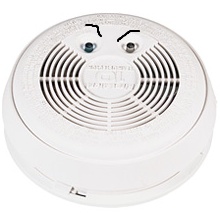 The Defendant
All content and design © 2006 by the creators of The Radish. All rights reserved.
Very few animals were harmed in the making of this website.